Mirvish Condos Save the Princess of Wales Theatres

David Mirvish and Grank Gehry the world renowned architect have designed a new 2 tower concept for Toronto's King Street West Condo. The plan is to save the historical Princess of Wales theatre and all other heritage buildings on the block.

With more than 40 iterations the latest plan calls for just two towers compared to the original design of three. So far, the city of Toronto planners show enthusiasm towards the condos. Prior to this design the city's planners were concerned with density and the dramatic change to the King Street West Skyview as well as the destruction of the Princess of Wales theatre and a couple of historic deemed warehouses.

With the concessions to the city, Mr. Mirvish hopes to gain the support to smash through the height restrictions. One tower is expected to be 92 storeys, 6 more than first proposed and over 300 metres high 6 metres taller than First Cnadian Place, the country's tallest building outside the CN tOWER. 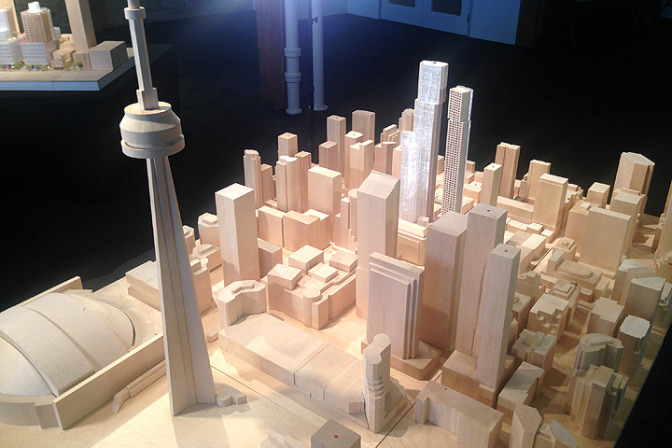 The project is controversial largely because of its height and density, and the demands it would place on local infrastructure. Planners took issue with the original design on details ranging from the amount of parking (the city wanted more) to the shadows that might be cast on downtown sidewalks.

With no resolution in sight, Adam Vaughan, then a city councillor, struck a 14-member working group to seek a compromise. About a month ago, Mr. Mirvish held a third meeting with the group, and decided that he would do two towers and preserve the theatre and warehouse space.

The latest iteration of the plans have received a nod from that group and planners, but needs the green light from Toronto-East York community council next month and Toronto city council in July.

Toronto’s head planner, Jennifer Keesmaat, said it is wrong to call the new plan a compromise. “It’s a new project that’s better than the project that existed before,” she said.

Ms. Keesmaat said planning staff are “absolutely thrilled” with the result. “Frank Gehry has been able to use his creativity to come up with a proposal that, quite frankly, exceeded my expectations about how you could have a tremendous amount of development on this site and at the same time be very true to its historical context.”

While the block would get a taller tower, Ms. Keesmaat said its slender profile would reduce shadows.

The two-tower design will be “sculpted almost like waterfalls flowing into a pool on one side, and on another aspect of it having a clay appearance,” Mr. Mirvish said.

“Frank is building me a jewel box,” Mr. Mirvish said. That “box” will be placed on top of the warehouse on the west end of the block, and will have 9,200 square feet of space to house art exhibitions. That’s a small fraction of the space in the original design to house Mr. Mirvish’s personal art collection. OCAD University will have a facility on the site as planned.

The two towers together will have about 2,000 units, down from more than 2,700. The second tower is planned at 82 storeys. Peter Kofman, president of Projectcore Inc., the developer and project manager, said the buildings have been designed in such a way that they could be rolled out in phases based on demand.

Mr. Vaughan, the area councillor until he resigned his seat to run in a federal by-election next month, predicts the project will transform the intersection of King and John streets into the cultural heart of the city with the gallery, OCAD University, theatres and TIFF Lightbox.